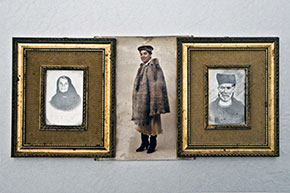 Bonaria Carmela Manca was born in Orune (province of Nuoro) in Sardinia, on 10 July 1925, of Paolo Manca and Speranza Cossu, the twelfth of thirteen children, of whom only nine, six boys and three girls, would reach adulthood. Hers had been a family of shepherds for generations, and ever since she was a five year-old child she used to follow her mother and father in their activities, both at home and in the fields around Orune, washing wool and laundry at the river, making bread, planting potatoes in the vegetable garden, even driving the oxen if it was necessary: all of this is what characterised her childhood!  She gained her elementary school certification in a school in the Thirties, in a class where the boys were separated from the girls. In her youth she learnt the basics of embroidery, which she would then develop admirably in the years to come. Her mother Speranza was a member of the Azione Cattolica and was a Dama di Carità, and Bonaria became the first juniors delegate within the Azione Cattolica at the age of thirteen. Belonging to this lay Catholic association implied the duty of living a suitably sober and retiring life, in fact, going to dances was forbidden. She left Sardinia for Rome for the first time in 1948 aged 23, with the Circoline group, for the occasion of the thirtieth anniversary of Father Gemelli’s Azione Cattolica. She stayed in the capital for a week, subsequently returning to Orune.
In January 1940, aged just 14, she lost her father.
In 1948 three of her brothers emigrated to the Continent, and she herself left Sardinia in 1951, with the aim of aiding them by doing their housework. She stayed for a few months and then returned to Orune. She departed from Orune on a definitive basis to move to Tuscania in 1956. Bonaria remembers she was accompanied to the port in Olbia by a family of friends, the Baranzellus, her sisters and her two brothers Mario and Pasquale.
During the Fifties, all of her relatives emigrated, in various waves, settling for good between Tuscania and Viterbo, her mother in 1959, with her widowed eldest sister Maria being the last in 1965. While her brother Giovanni came back to Sardinia, got married and then went to live in the village of Monti. 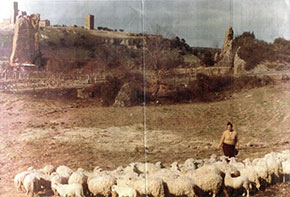 Bonaria even became a shepherdess in Tuscania, obliged by circumstances and by the needs of her relatives, making her skills and her energy available to them, something she could never have done in her land of origin. It was upsetting for her mother to see her daughter struggling and sacrificing herself with the flocks: “we were accustomed differently in Orune!” The culture of that Barbagia region village established women as the pivot of the family, but as housewives. In Tuscia land, Bonaria used to ride horses after her flocks, sometimes “even riding bareback”, with no saddle and no reins. She even drove a motorcycle, leaving quite a few astonished, in a small town like Tuscania in the Fifties! She began to paint in the early Eighties, having only been creative through her embroidery up to that moment: she told herself: “if I am capable of embroidering, I ought to be able to paint as well”! Her great artistic talent emerged within the deepest solitude. Her mother Speranza died in 1975 and her brother Ciriaco,  with whom she had always lived in Tuscania and with whom she managed their farming business, died in 1978. The husband she married in 1968 abandoned her in 1980. Solitude was painful, but it was also and especially freedom for Bonaria, it was an opportunity for entering into contact with the deepest part of herself, for which art became a vehicle of expression! She herself said: “It is all something that came out from within, I didn’t seek it. It was inside me but I didn’t know it”. 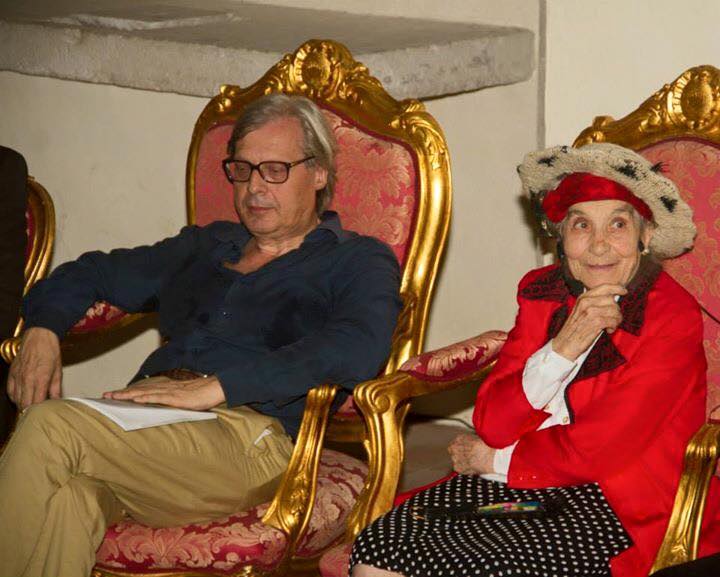 Art critic Vittorio Sgarbi wrote: “Bonaria is supported by an extraordinary multifaceted spontaneity, which makes her live in the present together with her own childhood world”. French writer and filmmaker Jean-Marie Drot said about her: “What I like in Bonaria’s work is the fact that almost nothing comes from the head, but everything comes from the heart. For me, hers is cosmic painting”. […] “In a certain way, Bonaria’s house is unique, perhaps in the whole of Italy. Having a painting by Bonaria  is like having a talisman, a lucky amulet in a world of solitude, it is like opening a window at once onto tomorrow, a future that will be full of light!” And this is what the artist and every artist has inside and is called upon to bring to others, a world of Goodness and joy, which is beauty because it is pure and uncontaminated, because “those ideas that are independent from us”, as Dutch philosopher Arnold Geulincx says, “are caused by God and do not arise from one’s thoughts”. Thus began an artistic production which may be deemed extraordinary, not only for its symbolism, its vivid colours, and the expressiveness of the paintings, but also for their number, which is estimated approximately at 1000 paintings on canvas, to which must be added her embroideries, tapestries, mosaics, and finally, the murals: over the years between 1996 to 2004, she began and finished paintings on the walls of her home. Her artistic vein also expresses itself through impromptu singing and poetry. A song she addresses many times to those who listen to her, says these words: “Forget yesterday, be reborn every day, there is naught lovelier than this!” Her life as a child and young woman in Orune is depicted in her works, her large family, brothers, sisters, her easily recognized father, because he is always depicted in the traditional Sardinian costume, with her mother at his side. And then the shepherdess Bonaria in Tuscania, spinning wool, weaving her own clothing, following her flock, always immersed within a nature she respects and loves. Religiousness and prayer continually directed to God, many paintings depicting Christ, the Nativity, religious processions taking place in Tuscania itself, but also visions of vanished prehistoric worlds, like the Etruscan one, with their protagonists: gods, magistrates, commanders, prisoners, artists, artisans and traders! Indeed, she claims to have seen many topics displayed in visions. She said: "I made them because I saw them!" Her house is located in an area of archaeological sites, Etruscan temples and cemeteries. Bonaria gathers stones, and reads ancient civilizations on them, like an ancient soothsayer! And her artistic expression, truly in a timeless timeline, leads us back from the countryside of Orune to the one in Tuscania, from the Baptism of Jesus to a vision of Zeus with the flower and of Minerva with the owl, from a still-life to lush and colourful nature in an agro-pastoral world with flowers, trees, birds, fish, cows, sheep, goats, horses, pigs, and to distant worlds represented by giraffes, mammoths and yaks. Large trees symbolize life, expanding in majesty and strength.
Thus, she paints events of her life, visions, dreams, but also the events which strike her most in the world, for example the first men who reached the summit of the Himalayas in 1982 without oxygen cylinders.
She said: "I have never mixed colours, they mix themselves: I was never able to select and to master a colour”.
Her first solo exhibition was set up in 1983 in Rome in a corner of Piazza Cavour.
Over the years, she has not only travelled within Italy, but also to various countries, setting up exhibitions in France, Switzerland, Holland, Belgium and Greece, all countries where her paintings are in museums and private collections.
In 2000, she took part in an international exhibition in Thessaloniki (Greece) entitled "Women, creators in the world", and on this occasion she was appointed as UNESCO ambassador.
A large number of paintings by Bonaria is held in the Jean-Marie Drot Modern Art Museum on the island of Ios in Greece.
The Dr. Guislain Museum in Ghent (Belgium) owns three paintings by Bonaria.
The De Stadshof Collection in Zwolle (The Netherlands) possesses many of Bonaria’s most beautiful paintings, having exhibited some at the Halle Saint Pierre Museum, Paris, from September 2014 - January 2015.
In November 2015, the Ministry of Culture declared Painter Bonaria Manca’s Artist Studio of particularly important interest, in accordance with Articles 11, paragraph 1, lett. b) and 51, paragraph 1 of Legislative Decree n. 42/2004 and subsequent amendments, and as such, it decreed that it is subject to all the protective provisions contained in the aforementioned law. Therefore, the Artist Studio was rendered unmovable from the apartment in which it is located.
Her House of Symbols is now a Museum-House.

21/05/2016 - To Bonaria Manca - Orune gave you a natural talent, but it was in Latium Tuscia that your painting cast its spell - Orune Municipal Administration, Mayor Michele M. Deserra.

06/1985 - “To Bonaria Manca for her high artistic and human talents” – City of Viterbo –Benedetto Menni Centre for combating tumours. For the occasion of the “Sons of Etruscans for life” performance. Almadiani Church.

2017 - "The world of Outsiders”, photography exhibition by curator Pavel Konecny at the Italian Cultural Institute in Prague, Czech Republic. From 19 January to 28 February 2017.

2016 - "Irregolari" (Mavericks) exhibition by curator Daniela Rosi showcased at the Palazzo Assessorile in Cles - Trento - From 9 July to 9 October. The paintings on display feature: Tempio Enkoe (The Enkoe Temple), La fanciullezza (Childhood), A spasso a Salonicco (A promenade in Thessaloniki-Salonika).

1985 “Figli degli Etruschi per la vita” (Sons of Etruscans for life) performance, organised by the Benedetto Menni Institute for combating tumours. The event took place in the town of Viterbo in the Almadiani Church between 13 and 16 June 1985. Bonaria exhibited her paintings together with other artists. Bonaria made ricotta in the square in front of the church where the exhibition was held, and offered it to the public.